I'm sure everybody enjoyed the warm sunny weather today and I hope you all also enjoyed playing Rolling Meadows. The course was in great condition and good scoring was achievable for those who were up to the task. The Gross A Flight was won by Doug Bowring who fired a sizzling round of 76 which included 3 birdies. The Net A Flight was won by Steve Amble with a very commendable net score of 73. The Gross B Flight was dominated by Bob Sweeney with an 80, while the Net B Flight was won by John Hirsch with a net score of 70. The winners of each of the gross and net flights will receive payouts of $50ea.

Congrats to everyone who cashed in today. Our next event is on Sunday, October 3rd. This is our end of the season One-Man Scramble and meeting afterwards. Make sure you sign up asap. Sign up deadline is September 27th. 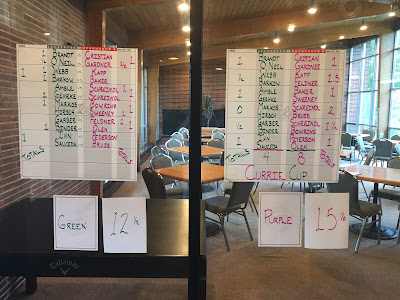 Email ThisBlogThis!Share to TwitterShare to FacebookShare to Pinterest
Labels: CurrieCup

Except for a couple of brief drizzles, we pretty much escaped the rain. Unfortunately, we weren't quite as lucky with the mosquitoes which were in abundance and a bit annoying. It took some serious focus to not let it affect your game. Based on a number of fine performances, many of you were able to do that. The team and skin payouts are detailed below. Congrats to Larry Dake and Pete Lapp who won the 2 man bestball event at 10 under par. I think it has been awhile since they have seen the winners circle. Congrats and well done! Although this was a team event I have to give a shout out to some fine individual performances. Honorary member Lee Gardner turned in a gross even par score of 72 followed by Cristan with a 75, Ullenberg with a 77, and Dake with a 79. Bill Zolandz fired a net 66 followed by Jack Bruss with a net 70. Jacks round included a gross 37 score on the back 9...lights out, Jack. Nice playing guys! Thanks to Doug Schafer for helping out with the scoring and skins payouts.

Hope everybody had fun. Our next club event is at Rolling Meadows on September 19th.
Link to Full Results