The 2021 season is officially in the books. Thank you to all of you who played, were on-time, and courtesy to other players during the season.

A big congratulations to Mark Cuthbert and Darrell Frenzel for sharing the title with year-long scores of -3. Mark edged out Darrell by $2.50 on the money list. As a reminder, the top 12 spots are paid from the residual pot of money after events and skins are paid out. We don’t carry over any money from year-to-year.

A few notes on the season:

Per usual we started in the cold and wind ending in the hot and humid.

The best net score throughout the season was -5 by Camosy, Pederson, and Carini.

Even more impressive was Camosy and Pederson shot -5 on a day with a frost delay, high temperature was 43 degrees, at a gusty Washington County.

TOC #2 at Oakwood kick our asses. The only event in my 5 years at the helm where no one broke their target score. The weather was great, the course was in great shape, so we had no excuses. Bizarre.

Justin Gorski had the most skins with 4.

Low gross score for the season was by Jake Boulware at Whitnall (71). High score for the year was at Oakwood (107). You know who you are.

Scheduling meeting is right around the corner, so we start all over again with the 2022 edition of the Tour of the County.

See you all at the remaining regular club events. 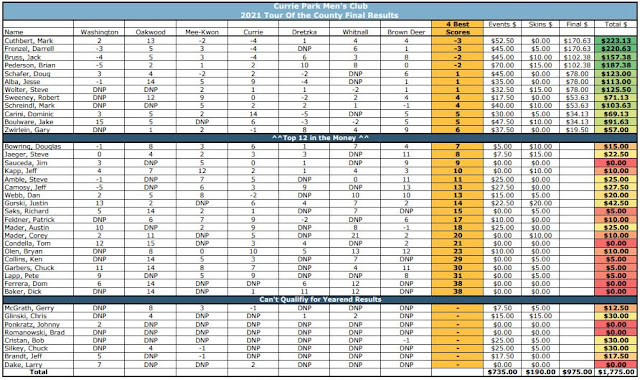 Here are the full results from last weekend’s event at Brown Deer. Course was in great shape and the weather was nice. Got a bit breezy at the end, but nothing we couldn’t handle.

Bob Cristan, Austin Mader, and Mark Schreindl navigated Brown Deer very well to win the event with net -1. Pederson, Alba, Frenzel, and Wolter also played well and cashed. One note, after the event when I announced results I forgot to mention Alba was in the money. Sorry Jesse!

Many different tees were played making it difficult to judge the official medalist. Bob Cristan had the low gross score with 78 from the blue tees.

Please let me know if you have any questions. 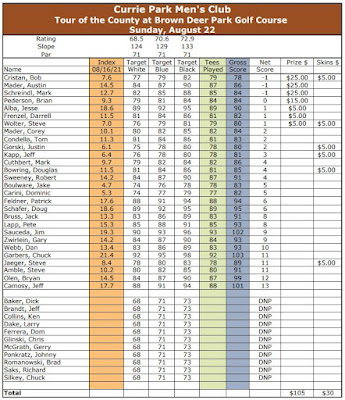 TOC players,
Attached are the full results from this past weekend’s event at Whitnall. Results were announced post round and available on the website over the weekend.

Looking ahead, our final TOC event is coming up on Sunday, August 22 at Brown Deer. Mark Cuthbert is the man to catch right now at -3 for the year. Bruss is close behind at -2. Attached are the full year-to-date standings. Those on the outside of the money list looking in include: Schriendl, Amble, Camosy, and Webb. Others need to play well and get some help.

See you all in a couple weeks. 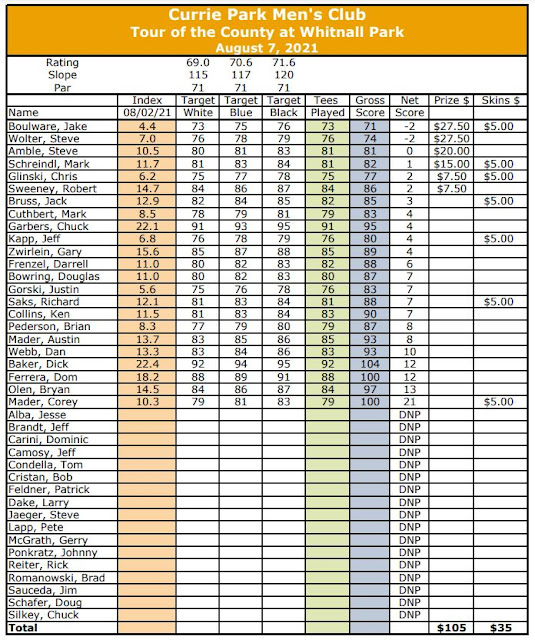 It was a steamy day at Dretzka over the weekend. Dom Carini was unphased and won the event with a net -5. Alba, Boulware, Feldner, Schafer, and Sweeney also played well and cashed. Jake Boulware was medalist with a gross 72 (+1).

Thank you again to Jeff Camosy for filling in while I was away. Guy does me a favor and I reward him with putting him in the last group. Sorry Jeff. 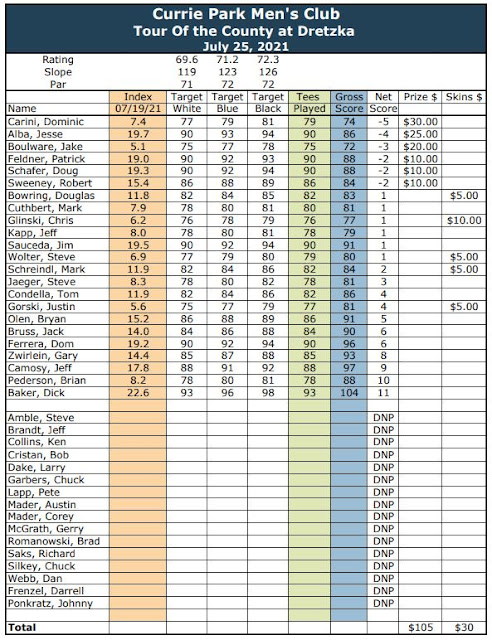 Attached you will find the results from Sunday’s TOC #4. Full results are on the club website here.

Jack Bruss strapped his golf bag to a droid and tied for first place along with Mark Cuthbert and Darrell Frenzel. Great rounds gentlemen. Eric Schreindl was your medalist for the day with a gross 75. Webb, McGrath, and Zwirlein also played well and cashed in the event. Skins were had by Pederson (3), Collins (5), Gorski (13), Jaeger (17) and McGrath (18).

We have a bit of a layoff in TOC events with the next one coming on July 25 at Dretzka. You can register for the event here. 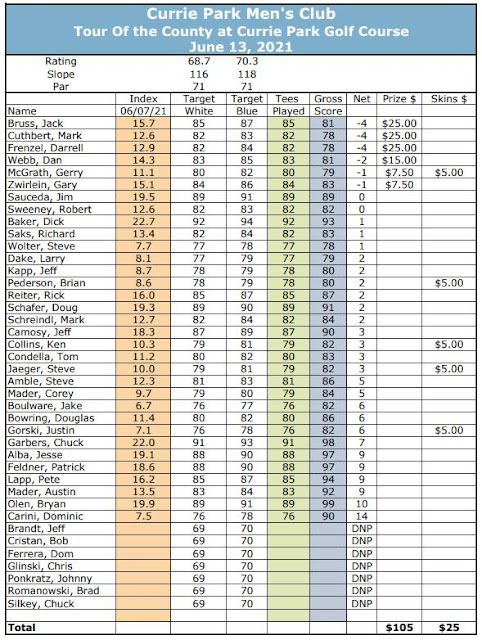 Here are the final results from TOC #3 at Mee-Kwon Park.

Doug Schafer and Mark Cuthbert tied for first with net -2. Brandt, Silkey, Olen, and Pederson also played well and cashed. 10 other players were within 2 shots of the money. Medalist was Chuck Silkey with a 74.

I will update the year-to-date standings after our fourth event this Sunday at Currie.

Thanks again to Rich Saks for doing the scoring in my absence. 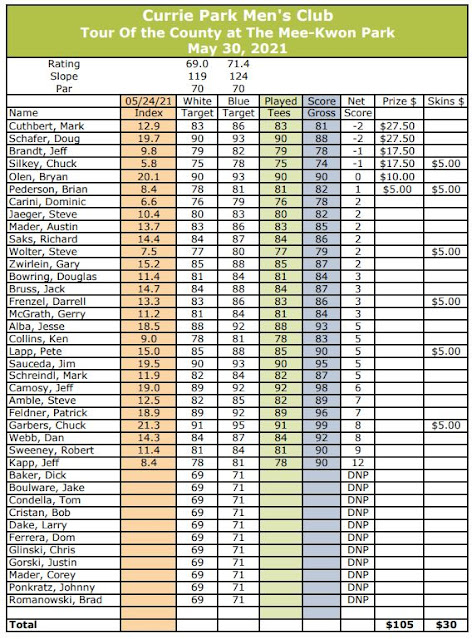 Oakwood Park was in immaculate condition, particularly the greens. The weather was cool, but not terrible. This event will remain a mystery to me. Despite pretty decent playing conditions most of us decided to let Oakwood get the best of us. For the first time in at least five years not a single player beat their target score.

Congratulations to Gary Zwirlein for winning the event with an 85, +1 net score. I don’t think Gary left the grounds thinking he was in the money let alone in first place! Gorksi, Pederson, Glinski, Jaeger, Schafer, and Silkey also placed in the money. Skins were had by Bruss (#2), Boulware (#7), Webb (#10), Jaeger (#12), Gorski (#15). Full results can be found here.

The next TOC will be held on May 30 at Mee-Kwon Park. Sign up is open. 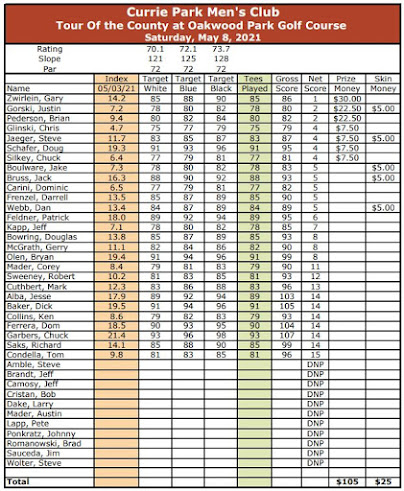 The weather was better than expected at Washington County Golf Course today. Brian Pederson and Jeff Camosy navigated the wind, the quasi air-raided greens, and a cool WI day to win the event at net -5.

Your medalist was Brian Pederson with a 79.

Thanks to those who helped with scoring. The next TOC event will be held at Oakwood Park on May 8. 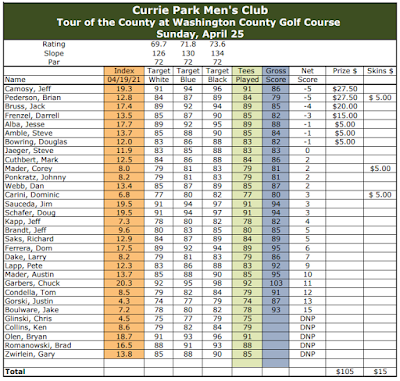 The “Tour of the County” (TOC) is an opportunity to play in organized, competitive golf outings, outside of the regular club events. You must be a member in good standing in the Currie Park Men’s Golf Club to participate. Essentially, you compete against your personal handicap, in a relaxed and friendly setting. Pairings are varied for each outing. This is a good way to get to know other members of the club, to get in practice rounds, or to just play more golf. USGA rules apply and everyone is expected to maintain the appropriate pace of play. Carts are optional.

All Currie Park Men’s Golf Club members are welcome; handicaps range from 2 to 28

Play against your own handicap (Target Score), adjusted for the course and selected tee box

$50 entry fee for the season (100% paid out at end of season) for low net scores at each event, based on your Target Score, skins game at each event.  Top low net total paid at year end (your best 4 of 7 net scores)

No penalty for missed events, only four lowest scores count for year end

If you would like to join, please pay the $50 entry fee to Brian Pederson, the Club Treasurer, and let him know you are joining the “Tour of the County”

May 08 at Oakwood Park Golf Course

May 30 at Mee-Kwon Park Golf Course